Embark on a Gourmet Winter Adventure 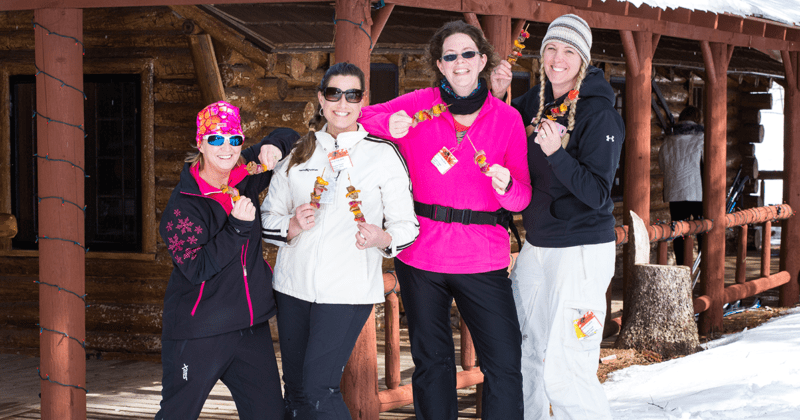 The Treetops Culinary Adventure Series all began with this winter gem and 2017 marks our 4th season of the Skiable Feast. We’ve coined it a Gourmet Winter Adventure because it’s the perfect combination of a little exercise, gourmet food, craft beer, and Michigan wine.

As you meander through the sprawling beauty of Treetops Resort, it's easy to forget you are just a few miles from downtown Gaylord.  Many locals don’t even know the rich storybook history of the property where your adventure awaits.

Guests would board the tram with their passport

A developer named Kirk Gladwin wanted to open a wildlife nature preserve with exotic animals. The project cost over a million dollars and he opened it as a family tourist attraction on a piece of land that was home to 2,000 acres of Timber Mountain Ranch. It was designed like Jurassic Park where the visitors saw movies, rode on a tram, and even had passports to view the animals. Visitors were not allowed to wander through the property, but were made to stay on the tram, until it arrived at an observation point, because the animals were free roaming.

The developer assured the county that he had no plans to introduce any carnivorous animals into the collection like bears or large cats. But once you were inside, there were Bison, Elk, Axis deer, Sika deer, Chocolate Fallow deer, Big Horn sheep and different species of goats. The tram driver would follow the path while the narrator pointed out the animals out and told you about them.

The Pavilion Restaurant had an elevated observation deck with telescopes on railings to watch animals from. Arriving and departing from the restaurant, the tram drivers used remote control devices to open and close the gates behind them. Some of the animals figured this out and would stand near the gate, waiting for it to open, attempting escape.

After exiting the fenced area, the tram took the guests down the main road to the River Cabin. This cabin was originally where the guests of the hunting ranch across the street from Project Nature, would stay while paying to hunt exotic animals from all around the world. That was all before the park was built.

At the River Cabin, you were allowed off the tram to tour the cabin and view the Llamas in a smaller fenced area. Across from the River Cabin, there was a larger fenced area with two giraffes and even an ostrich. Guests could walk around until they were ready to go and then just hop on the next tram which took you back to the Wilderness cabin, which ended your journey.

One of the many wonders you encounter on your adventure

At one point, there was some talk of building an outdoor water slide, but the place was shut down before that ever came to fruition. Outside of the fence, people saw black bears and other wild animals.

Project Nature only operated for about a year, but the stories will be told and the animals will be spotted for years to come.

The Skiable Feast takes you to all the tram stops and is available Saturdays in January and February, lasting between 4-5 hours, depending on ability and how many times you stop for photos. This 6 km (3.8 miles) intermediate cross country ski excursion has guides to lead the way, but you and your friends are free to enjoy the day at your own pace.

Along the trails, you’ll find gourmet food and beverage stations, where you can take a rest and refuel with a tasty cup of gumbo or chowder, cod sliders, fresh fruits and veggies, Michigan craft beers and so much more.

$89 per person, (inclusive) with special lodging packages available. Reservations can be made by visiting Treetops.com or calling 888-Treetops.